I've been experiencing abit of the lampworking blues of late.  Not able to get motivated to light the torch, not inspired by any colour combos, just generally bleurgh!  I know I'm not alone and we all experience the mojo walkabouts every now and again.  Anyway, I think I am emerging from the dark tunnel and I have actually lit the torch and fired up the kiln twice in one week.

I was having a little mooch around YouTube and found this video tutorial for how to make a star bead and after watching a couple of times I ventured into the 'studio' and lit the torch!!!!  Here are my first attempts 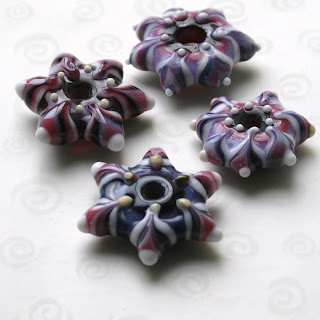 They aren't bad for a first attempt.  They are a little wonky, the points aren't as even as I would like.  I need to practice the raking technique which is how the colours get pulled down to the hole.  All in all though I was rather pleased.

My latest session was a little more successful... 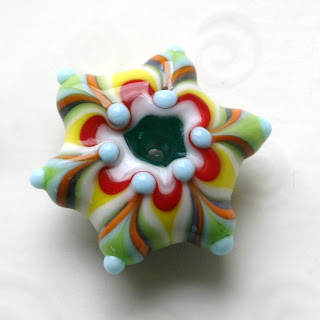 I like the colours of these two (left and below)  but there is still work to be done, the dots around the holes have been melted in a little bit too much for my liking  but I definitely feel I am on the right track. 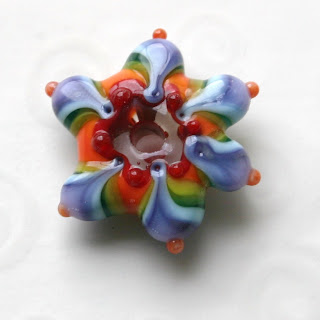 While my mojo was on walkabout I decided some glass related retail therapy might be in order.  I bought some beautiful rainbow murrini from FlamingEck beads and this what I came up with 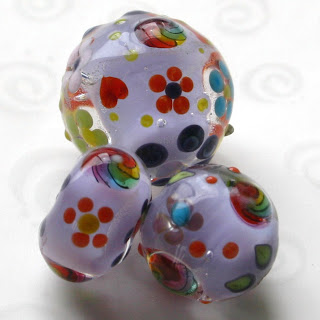 I think these might be keepers, they are so colourful and they make me smile!

Well its pouring with rain here - I know its what we need but it does dampen the spirits.