How does your Garden Grow..?

I have always enjoyed looking at a nice gardens but it is only recently that I have started to take an interest in our own garden.  Up until now my OH has taken care of all things garden.  Earlier in the year we were given a huge batch of purple sprouting brocolli.  We put some in the allotment, they have failed due to neglect.  We went on holiday and the weeds took over and swamped the little plants.  We put most of the plants in the garden, we have recently moved to our new build and the garden has lots of blank spaces.

We have seen the Cabbage Whites on the plants for a while and thought nothing of it 'oh how lovely to have some wildlife in the garden at last'.  Ofcourse Cabbage Whites love cabbages and they also love purple sprouting brocolli!  This is what we returned to after our 1 week holiday 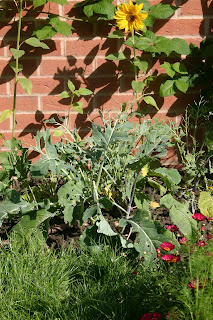 The plants have been stripped of pretty much all their leaf....  However, its not all bad news.  I really love to have flowers in the house but they are expensive to buy on a regular basis.  We have had Sarah Raven's book called something like 'The Cut Flower Garden' on the shelf for a while and I have flicked through it several times.  This year I decided I would take action and have a go so I headed out to the local garden centre and bought some packets of seed thinking that I would get them started to have a crop of flowers next year.  However, when we got from out hols this is what we found 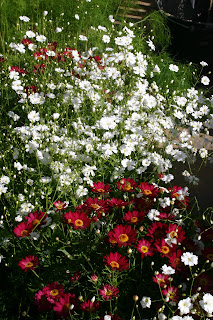 You should be looking at the white flowers as they are the flowers I grew from seed I can't believe it.  Seasoned gardeners out there will be rolling their eyes now but I am really proud.  There wasn't much to it to be fair, just scattered some compost then planted the seed and let nature do her magic.  The flowers in question are Gypsophilia by the way and they are great for filling out an arrangement and adding some elegance.

I have picked quite a lot already and arranged a few vases with dahlia, roebeckia (spelling?) Michelmas Daisies and some other very pretty yellow daisies.  I haven't taken pictures as it is too dark in the house now to get a decent shot.

Feeling very pleased with myself!  Now to go sort the beads from last night's session at the torch, here is a sneaky peek 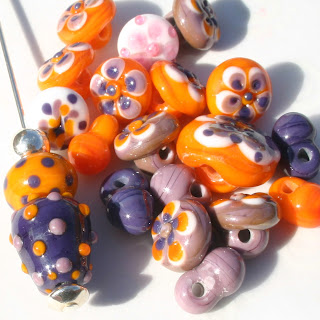