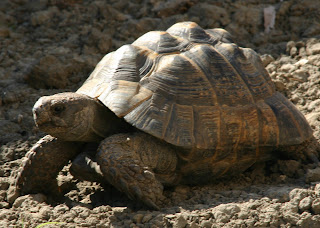 We haven't ventured into the world of pets until now.  There has been much talk in the past about getting guinea pigs, but we totted up the cost of hutch etc... then we decided we would move house so it wasn't a good time.  Anywho, a friend of mine takes in tortoises that people can no longer look after and then finds new homes for them as part of the work the British Chelonia Group do.  We joined the Group and then I took Reuben to pick a tortoise for re-homing.
Wonka, which is the name he came with, seems to be settling in nicely.  I'm sure he must think the garden is 10 times bigger than it is due to the fact that he wanders so far then Reuben picks him up and turns him around to go back the way he came. 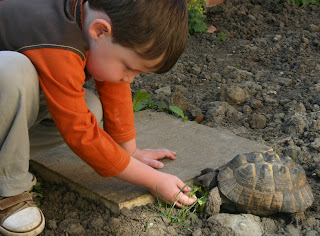 Its a great feeling to have a pet, I didn't have any growing up because we moved around alot.  I will confess though it is similar to bringing home a new baby, especially the first night, we were fretting about he was ok, was he going to be warm enough?  But all seems to be fine so far. 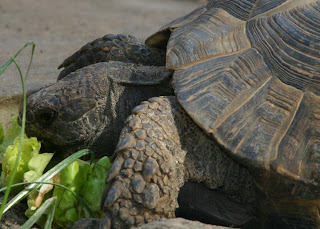 Wonka is rather partial to lettuce, freshly picked from the allotment ofcourse!
Posted by Blue Kiln Beads at 13:40